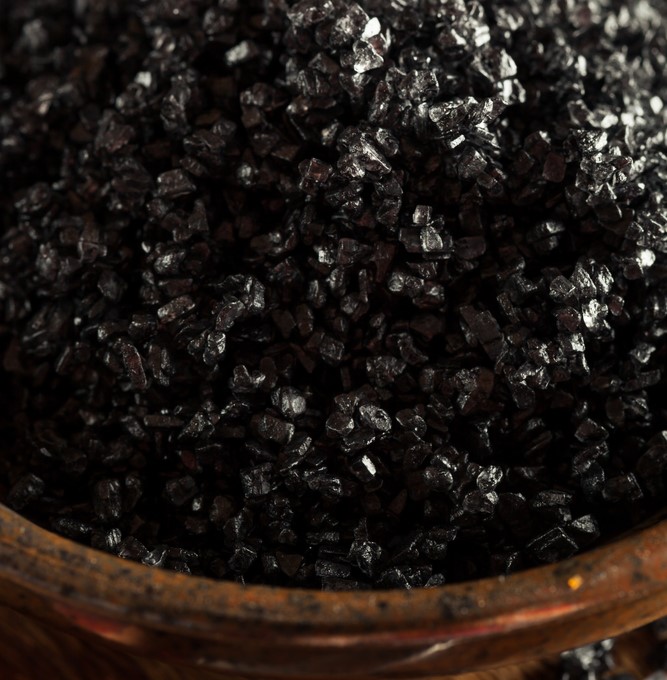 A FEW RECIPES FOR BLACK SALT

Black Salt is one of those traditional preparations that you either use or you don’t. It’s easy enough to make, especially these days, and it keeps with no effort. Like many things in conjure, Black Salt pulls double-duty as both a protective work and as a crossing work.

Now, I have seen several recipes over the years, each with their own their merits. I share with you here some variations that I have used and of which I am aware, so you can make your own.

This is the first recipe for Black Salt that I ever learned. If memory serves, it was posted in a Yahoo Group that was run by an older woman who was teaching out of her family’s grimoire. Oddly enough, at the time, the only place I remember ever seeing Black Salt for sale, locally, was in the botanicas, as “Sal Negra” or “Sal de las Brujas.” These days, you can find it most anywhere, although, what you will actually get will vary widely.

So, lets look at our list of ingredients here. What’s first? Yep, salt. What do we know about salt? That’s right, “It does what you tell it.” This is important to remember when you are setting your intention for what your Black Salt is going to do. (Actually, you should be setting an intention for every ingredient you add, whatever you make.)

So, what’s next? Black Pepper. It’s an ingredient that is both protective and aggressive. Black Pepper is commonly used to protect against poisoning through the feet but is also used for jinixing.

Our third ingredient, Cayenne Pepper, primarily aggressive in its nature, it causes inflammatory confusion and vexation. It is also one of the key ingredients in Hot Foot products.

Lastly, we have our coloring agents. What is lampblack? What is chimney soot? Well, in both instances, they are the black carbon particle buildup that remains after something is inefficiently burnt; lampblack being produced by the burning of an oil lamp and chimney soot coming from the chimney of a fireplace. In both cases, the black that is created is opaque and oily and binds well to the other ingredients in the mixture. The downside to using lampblack, in particular, is that it is somewhat tedious to make and you often get more of a grey salt than a deep black.

If you want to know how to make lampblack, here’s a very good Instructable for that: How to Make Lampblack.

I cannot remember where I first heard/read this recipe for making Black Salt. Actually, it’s more of a technique.

Essentially, you put your salt and black pepper in a cast iron skillet. (I have also noted the use of a cast iron cauldron instead of a skillet.) You heat the ingredients and scrape them around so they pick up the black and iron from the skillet. Depending on how good of condition your skillet is, you may also get some rust in there, so you get a bit of red. That’s okay. When I think of rust, I think of War Water and something that is sharp, dangerous, and decaying, so that works. Of course, iron is protective in its own right even before it develops rust. There may be other ingredients (I don’t remember), but the iron and the black from the skillet, and the work involved, I think, are the main points here. Again, you will typically get a result that is more grey than black. (After some thinking on this, I believe Mama Starr Casas is where I first heard this thing with the skillet. Her recipe also includes gun powder that is added once the other ingredients have cooled. Danger alert: don’t introduce heat or flame to gun powder, unless you just want to be injured.)

Often I am seeing, on various blogs and Facebook groups, the inclusion of ash and/or charcoal as an easy way of putting the “Black” in Black Salt. I have added Sulfur here to highlight another dual-purpose ingredient possibility.

Other types of ash and/or charcoal that one could include, or use instead, are petition ashes (write out a petition and burn it to ash), Ash Wednesday ashes (ashes made from the burning of Palm Sunday palm branches), the char-coaled wood or ashes from a forest fire or ritual campfire, or even a tiny bit of the ashes of a loved one.

I remember one of the first questions I asked, once I became aware that there was such a thing as culinary Black Salt, was, ‘Is it the same thing as Witches’ Salt?’ Well, it’s not customarily, but it can be. Culinary Black Salt refers to either Hawaiian Black Lava Salt or Indian Black Salt (aka Kala Namak). While either of these is salt and can be used (at an expense), Hawaiian Black Lava Salt has the added bonus of being coated in coconut shell charcoal powder. Alternately, while really not black, Indian Black Salt does include a bit of sulfur (see Recipe # 3), which gives it a special flavor that gastronomes adore.

I, personally, prefer my Black Salt to be jet-black with an oily sheen like the kind I used to see in the botanicas of my youth; that salt looked like it meant business. Now that I have found Black Lava Salt (born of fire!), my ebony aesthetic-loving heart is fulfilled. Here’s how I make Black Salt these days; it’s formulated to both protect/keep away and draw in the good.

So, as you can see, there’s a bit of an evolution going on here. As we learn new things, we adopt them and make them our own. Even if we don’t adopt all parts of them, they are still good to know from a historical or traditional perspective. Eventually, you arrive at something that both makes your heart sing and gets the job done.