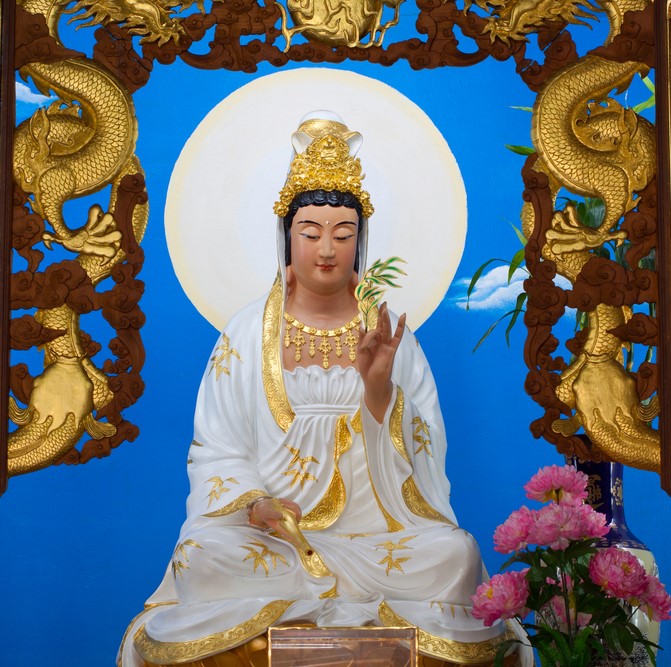 CHINA’S MOST WELL-KNOWN AND BELOVED GODDESS

As you may or may not be aware, for decades now, I have practiced Feng Shui along with hoodoo. Now, I don’t mix them, but the whole thing about clean people and spaces overlaps, so any time I can serve both aims with the same amount of work, I’m a big fan! Anyways, it was on a trip to the local Chinese market that I first saw a statue of Kuan Yin, and I was immediately smitten with her grace, beauty, and tranquility. I had to have this particular statue and she came home with me. She now sits next to a very nice Hotai and they hold court in my workroom.

More often than I ever would have imagined, it seems like these days those who want to get pregnant are having a harder time of it. However, to those who are in the position of wanting to get pregnant but somehow haven’t or can’t, I always recommend working with Kuan Yin. (C’mon, a 1,437,038,766 Chinese can’t be wrong.)

Kuan Yin (also known as Avalokitishvara), the Goddess of Mercy and Compassion, is the Divine Mother aspect of Buddhism. Her name in Sanskrit means “She who hears the cries of the world.” According to Buddhist mythology, Kuan Yin was about to enter Nirvana, but paused on the threshold as the suffering of the world reached her ears. Upon hearing the world’s pain, she turned her back on Nirvana, and vowed to remain in the earthly realms until all other living beings had been released from the suffering of reincarnation, achieved their own enlightenment, and entered Nirvana before her.

Legend also tells of Kuan Yin being born from a ray of light that sprang from Amitabha Buddha’s right eye. About which he immediately exclaimed, “Om Mani Padme Hum” which translates to “The Jewel in the Lotus.” “Om Mani Padme Hum” remains the most well-known mantra with which she is invoked.

Through history and various cultures, Kuan Yin was depicted as both a male and a female, despite her role as a mother-goddess. In fact, as a Bodhisattva (Enlightened One), she can take any form needed to facilitate the assistance of those she helps. However, around the 12th century, she became more and more frequently depicted as a female, until eventually, she became the ideal of womanhood and the embodiment of all things female. Despite that metamorphosis, more recently, she is finding recognition in the LGBTQ community as an androgynous and accepting spirit.

Whatever her gender, or lack thereof, there is no disputing her deep love and care for the beings of the world. Called by anyone or anything, she will come to comfort, heal, and intervene. It is said that one only need to cry out to her for help and even the executioner’s blade will shatter in his hands.

Petitioning Kuan Yin is very simple and easy; she will work with anyone and her gentle spirit is not demanding. She is the patron of fertility, pregnancy, and motherhood, and a protector of women and children, in general. In China, those wishing to become pregnant will appeal to Kwan Yin as she has a reputation for performing miracles in that regard. In addition, she is the patron of sailors, anglers, artisans, farmers, merchants, and those under criminal prosecution. In addition, call on Kuan Yin for good luck, prosperity and success in business, good health, and protection from enemies and other threats. Lastly, as Kuan Yin loves the world she can also teach those who need to learn to love themselves.

Starting to work with Kuan Yin is easy. Procure a statue or a picture of her (one printed from the web, in a pretty frame, is fine). Call on her using her special manta, state your petition, and thank her. For offerings, she likes incense, sweet tea, mandarin oranges, or anything else you feel compelled to share. She is so very kind and gentle that you can’t really go wrong; just keep her altar clean, position her a respectable three feet or more off of the floor, and she doesn’t do bathrooms. I also like to position her facing the East.